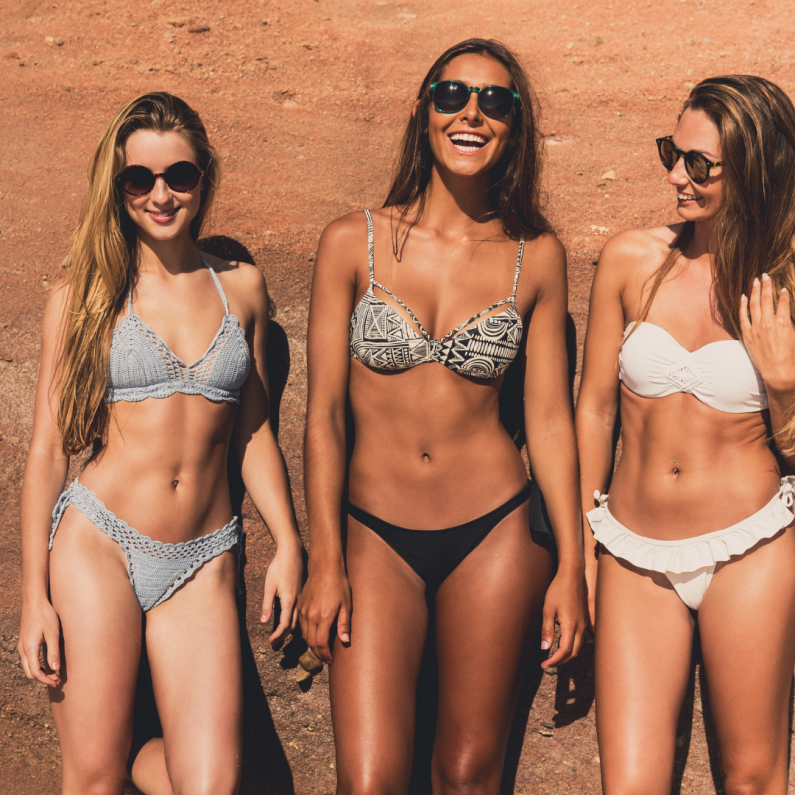 Fashion has its place and beachwear, although it can be worn anywhere, is generally own worn on or close to a beach.

In this article, we shall think about how shorts compare, bikinis measure up, and how flip-flops have become the standard wear for even stony beaches.

Shorts can be worn by either gender and come in a variety of lengths when it comes to gaining a suntan where you want it. Ripped shorts are perhaps not the way to visit a beach unless you desire to create a rather irregular suntan. Longer shorts are considered as suitable for a beach as a shorter pair.

Bermuda Shorts are particularly popular on beaches because of their semi-casual appearance and their colourful and universal appeal. A range of bright colours and patterns are available to create that fun and happy beach vibe. By definition, the hem, which can be either cuffed or un-cuffed, should be around 1 inch (2.5 cm) above the knee.

For some history, it is interesting to note that we have Nathaniel Coxon, a Bermudian tea shop owner, to thank for Bermuda shorts. It was in 1914 that he hemmed up part of his employees’ uniforms to make them more comfortable in the heat. It is, of course, this same heat that we desire to bask in whilst on a beach wearing their modern counterpart.

In terms of their invention, bikinis came later than Bermuda shorts. It was on 5 July 1946 that Louis Réard unveiled, or revealed, his daring two-piece swimsuit for ladies at the Piscine Molitor. This is one of Paris’s popular swimming pools. The model, incidentally, was Micheline Bernardini.

Well, the bikini has certainly taken off since then and has become standard beachwear for females relaxing on a beach. It allows for as much of the body to acquire a suntan as is possible, yet still, retain for its wearer a modicum of modesty.

Whereas a bikini is charged with showing off as much flesh as possible, a one-piece perhaps represents something a little more modest but in keeping with a beach rather than a more formal setting. A one-piece, or monokini, has given many women confidence when they might have felt too self-conscious wearing a bikini.

In keeping with the beach setting, a bikini is perfect for rigorous swimming and water sports when you want to experience adventure on the beach.

Flip-flops, or thongs if you come from Australia, are typical beachwear for the feet now. They are considered something disposable that can be kicked off and lost and not worried about. Also, something that can be slipped off once making it off the stones and down onto the softer sands of the beach. They are waterproof to allow for paddling. Flip-flops are available in many beach shops, and along piers, so if you forget to bring them you will not find it difficult to buy any when there is a beach close by.

This type of footwear originates from Japan. It was during World War II when Japan was greatly into rubber production that flip-flops appeared. Japan had taken over some rubber tree plantations throughout Southeast Asia. During the 1960s, flip-flops were referred to in some places as  “go-aheads”. This is because you could not easily walk backward in them. In Australia, as mentioned, they are still known as thongs. This can be quite awkward when New Zealand is referring to thongs as underwear. Although they are 2,583.3 miles apart in air miles, so it would be hard to mix things up. But then, the internet is bringing us all closer together, and we can purchase things from all over the world, whatever they are called. We just have to be aware that different online stores might call them different things. For example, with books, a hardback in the UK will be advertised as a hardcover in America.

So, there we have it, three items of either clothing or footwear that will have us heading straight to the beach because that is where we are appropriately dressed for. We should not perhaps run to the beach, however, or try walking back towards it, as flip-flops are not exactly designed for that.